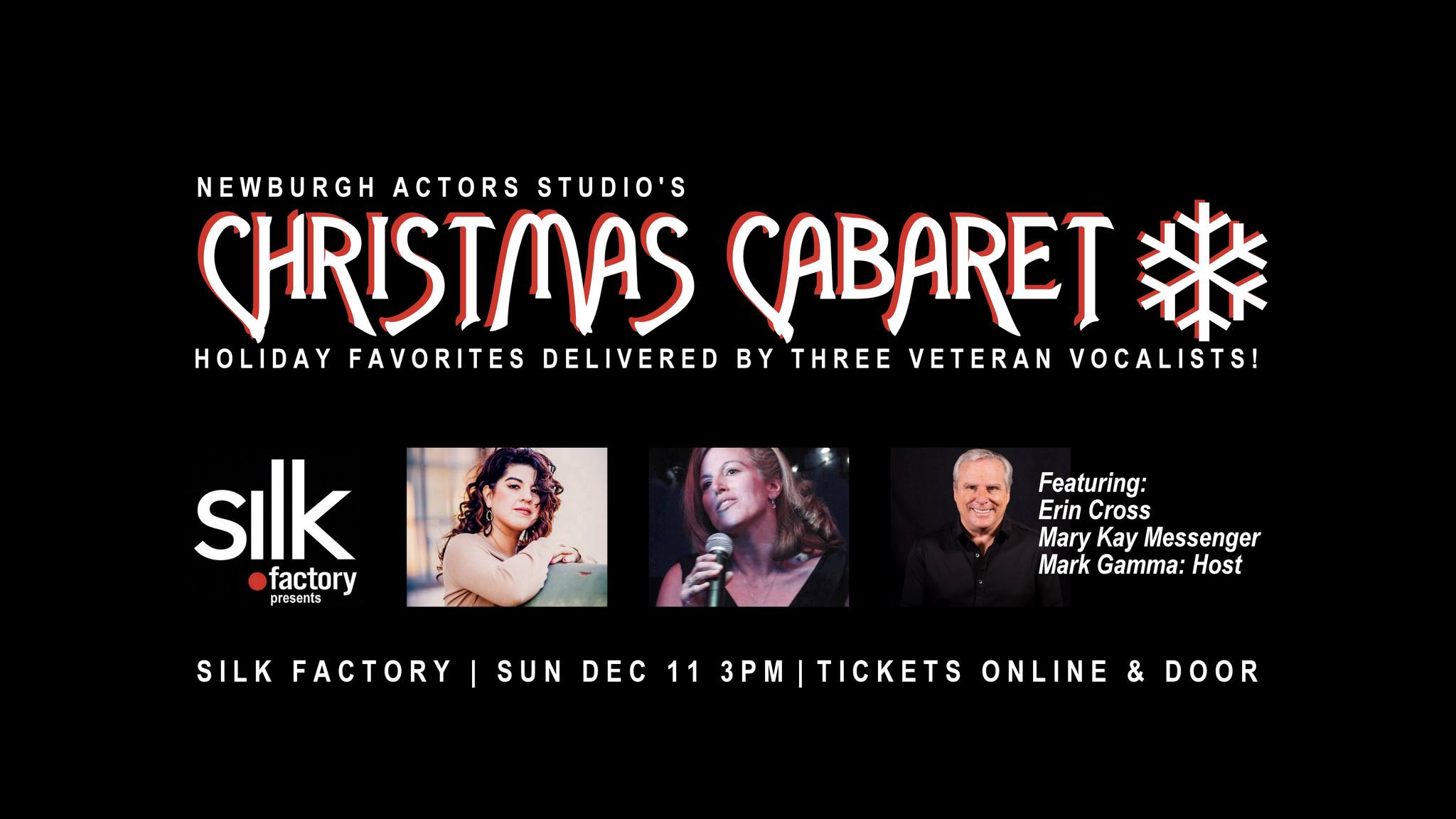 Newburgh Actors’ Studio presents a Christmas Cabaret!
More than two dozen Holiday favorites delivered by three veteran vocalists.
FEATURING:
Erin Cross
https://www.facebook.com/ms.erin.cross/
https://thearmoniaband.com/home
https://www.youtube.com/channel/UC4yUaAmKPOlVC43XmncGsyQ
Hudson Valley based Erin Cross, has performed extensively in regional theatre since the age of five.
Erin is the lead singer for The Armonia Band and thrives on live performance. Well versed in rock, pop, blues along with musical theatre, Erin brings sass and a sultry sound to the classics.
You may hear Erin performing the National Anthem throughout the Hudson Valley at sporting and fundraising events, including the Scranton Wilkes-Barre Rail Riders. Erin is a member of both Studio la Fenice and the Deena Levy Theatre Studio where she continues to studio the vocal and dramatic arts.
Mary Kay Messenger
https://westpointband.com/…/personnel/vocalist-guitar.html
A well-known soloist throughout the Hudson Valley region, Mary Kay performs Classical, Broadway, Jazz and Popular music. She is the premier vocalist for the United States Military Academy Band, West Point, NY and first sang with them in 1980, joining the Army in 1996.
She performed as a soloist for a European Summer Broadway Tour in the Netherlands, Germany, Switzerland, Austria, Belgium, France and England and has appeared locally in several musicals including Godspell, Shenandoah and Grease, and as well with the famous Irish tenors, Frank Patterson, John McDermott, the Nexus percussion group and Sylvia McNair and with the Boston Pops under the direction of Keith Lockhart.
She has sung the timeless roles of Rosalinda/Die Fledermaus, Donna Elvira/Don Giovanni, First Lady/The Magic Flute, with the Amato Opera Theatre NYC, and Mimi/La Boheme in Montclair, New Jersey, and has performed in An Evening of Bel Canto and An Evening of Operatic and Neapolitan Love Songs at the Bardavon Opera House in Poughkeepsie, NY.
Erin was a featured soloist for the United States Military Academy’s Bicentennial Concert at Carnegie Hall, the Royal Norwegian Military Band in Oslo, Norway and was the first American Military vocalist to perform with the Military Band of the Peoples Liberation Army in Beijing, China.
Mark Gamma
https://www.facebook.com/mark.gamma.5
https://www.facebook.com/profile.php?id=100076185984588
Gamma has been performing in front of audiences since 1959. He is an accomplished singer, actor and film maker, with producer and performance credits on films including:
“The Newburgh Sting” HBO Winner of the 2017 Prestigious Peabody Award; “AMERICA america” PBS;
“Newburgh the 6th Borough” Winner of the 2010 Williamsburg Film Festival’s Peoples Choice Award.
and three critically acclaimed documentaries: “The Lost City Diaries” Amazon Prime; “The Valley of Music”;
“The Beat Goes On”.
Mark produced and directed the historical documentary short of the final days of the Famed “Astor Room” at Kaufman Astoria Studios frequented by Rudolph Valentino, the Marx Brothers and a host of others. The film features Hal Rosenbluth President and CEO of Kaufman Astoria Studios.

He has produced and directed over 30 Stage productions at the Prestigious Newburgh Actors Studio, and is a member of SAG and AFTRA since 2004. In addition to film production, Mark has been teaching Acting at the Newburgh Armory Unity Center since 2010, and developing programs for inner city kids. A second generation native of Newburgh NY, Mark is passionate about telling Newburgh’s story, as well as her extraordinary part in American History.